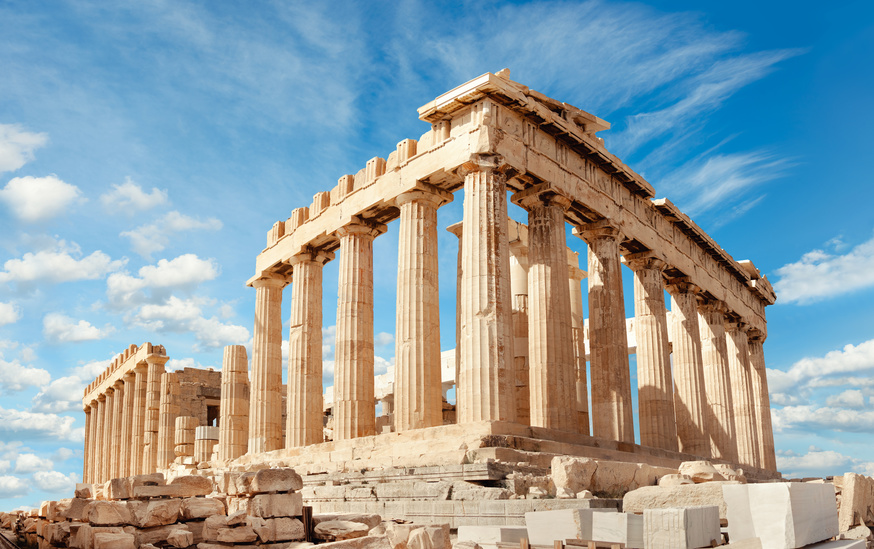 Athens is the capital of Greece, the country considered the birthplace of Western civilization, where Philosophy, Literature, Mythology, Science, Politics, Democracy, Olympic Games, among other things, were born. Despite being a city with more than 3 thousand years of existence, the old and the modern meet side by side united in a beautiful landscape. Check out this 4-day itinerary with great tips and the must-see places in this charming city.

Open this trip plan on Tripsapp.com
Select the date when you would like to start this trip:

Early in the morning, start the stroll with the main attraction of Athens:the Acropolis of Athens, which stands on a hill at 150 meters altitude and dates from around 450 BC. Among the most visited buildings are the Parthenon, the main temple of Athens, dedicated to the goddess Patroness of the city, and the Erechtheion, the temple that has the famous Caryatids, columns in the form of female statues. The tip is to get the ticket to the Acropolis, which costs 20 euros and gives you the right to visit as well the Agora, the Theater of Dionysus, the North Acropolis Hill, Roman Agora, Kerameikos, Temple of Olympian Zeus and the Hadrian’s Library. The ticket is valid for 5 days, so if you are very tired on the first day, you can visit some of these sights on other day without a rush. After visiting the Acropolis, head to the Theatre of Dionysus, which is the oldest in the world and the cradle of Western drama. The next must-see stop is the  Acropolis Museum. In this museum there are exhibited various pieces, sculptures and recovered and restored artifacts, as well as explanations, models and films that tell more about the history and the art behind the monuments. From there, head to the Temple of Olympian Zeus, which is one of the largest temples dedicated to Zeus. The construction began in 512 BC but was just completed more than 600 years later by the Roman Emperor Hadrian. The Arch of Hadrian, which stands outside the temple complex, was built around 130d.C, in honor of the emperor. At night, visit the neighborhood of Monastiraki, known for its vibrant nightlife and several restaurants serving quality food at great prices.

On the second day in Athens, begin by strolling in the Agora of Athens, which is on the side of the Acropolis and was one of the most important spaces of the city in antiquity. It was there that important public buildings were located and where many commercial and social activities took place. Among the ruins stands out the wonderful Temple of Hephaestus, the oldest preserved Greek temple in the world, retaining the original columns and ceiling. On the side of the ancient Agora is the Roman Agora, which was built between 19 and 11 BC, with donations from Julius Caesar and Augustus. Later, due to invading enemies, it replaced the ancient Agora as an administrative and commercial center. In the afternoon, the tip is to get to know the neighborhood of Psirri. To get there, take the Ermou St., famous for its shops, in addition to several bakeries and some restaurants. If you like to shop, this is definitely one of the places to go. Arriving in Psirri, enjoy one of the most cozy places of Athens, especially at night, when the colorful lights of the taverns light up and live Greek music echoes throughout the neighborhood.

The morning of the third day, we suggest dedicating to the National Archaeological Museum. It is a good option for those who want to know even more about Greek civilization. From there, walk to Kolonaki, Athens’ most chic neighborhood. In this neighborhood is located the Lycabettus Hill, the highest point of the city that offers a spectacular view. From above you can see all of Athens, including the Aegean Sea, in the background. Simply a must-see! Near the Lycabettus Hill, you will find the Benaki Museum, which possesses exhibits of art, history, ethnology and archeology of Greece. The museum collection is amazing and well worth the visit. In the afternoon, is worth visiting the Panathenaic Stadium, one of the oldest stadiums in the world, which hosted the first modern Olympics in 1896. It is worth renting the audio guide that explains all the corners of the stadium in detail. To close the day with a gold key, spend the night in the neighborhood called Plaka, probably the most touristic district of Athens. There are many charming shops and restaurants, serving typical food and drinks.

On the last day in the city, visit the main square of Athens, where the Greek Parliament is located, Syntagma Square. Here it is worth taking a look at the changing of the guards, called Evzones, who wear a typical Greek outfit. On the side of the square is the National Garden, an oasis within the capital. It is a very nice place, with many trees, and small artificial ponds with colorful fish. Great attraction to end up the trip!

Open this trip plan on Tripsapp.com
Select the date when you would like to start this trip:
This entry was posted in Trip plans

This site uses Akismet to reduce spam. Learn how your comment data is processed.